This blog explores the human, environmental and economic impacts of ecosystem destruction.

Effects of Oil Spills in the Mauritian Ocean. 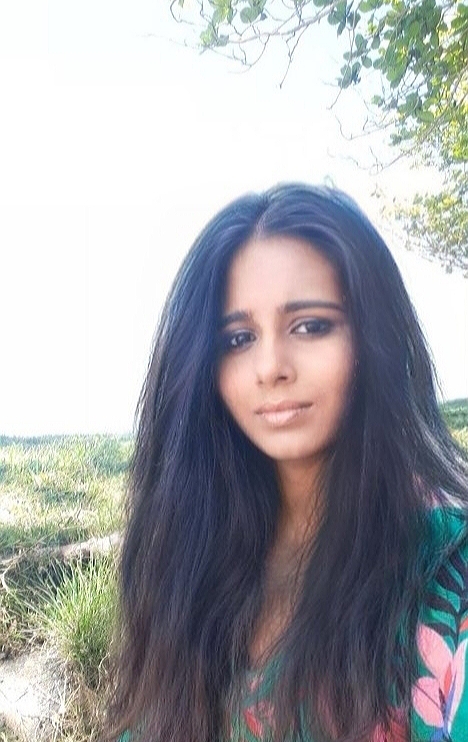 The captain and first mate of the MW Wakashio, a shipwreck in 2020 that caused an oil spill on the coast of Mauritius, were found guilty of the worst pollution ever known in this Indian Ocean archipelago. Efforts made to control oil leaking from the ship appeared to have been successful  initially. However, the oil spill continued along the coastline.  The ship was traveling from Singapore to Brazil. The Japanese bulk carrier on the 25th July 2020 hit a coral reef in the southeast of Mauritius, an environmentally sensitive area, while traveling from China to Brazil, on 25 July 2020.

On 5 August and, shortly thereafter oil began to leak releasing more than 1000 tons of oil in the crystal clear lagoon by 11 August 2020, according to International Tanker Owners Pollution Federation (ITOPF). Much manpower has been used to control the potential environmental disaster which added more burdens on the Mauritian economy.

The Indian captain, Sunil Kumar Nandeshwar, who admitted during the hearing that he was partying on board with his crew mate when they both were on duty and thus he was voluntarily drunk, was found guilty, along with his Sri Lankan first mate Hitihanillage Subhoda Janendra Tilakaratna, thus ,“endangering the safety of navigation“ by a court in Port Louis, Mauritius. Both men apologized for the accident. They were sentenced to 20 months in prison. The sentence was pronounced in December 2021.

For so many damages caused to the environment, marine life, and also to peoples livelihood in the fishing industry and the impacts on human health, only 20 months of imprisonment do not seem enough.

Does this punishment achieve justice for humans and for nature? [1] 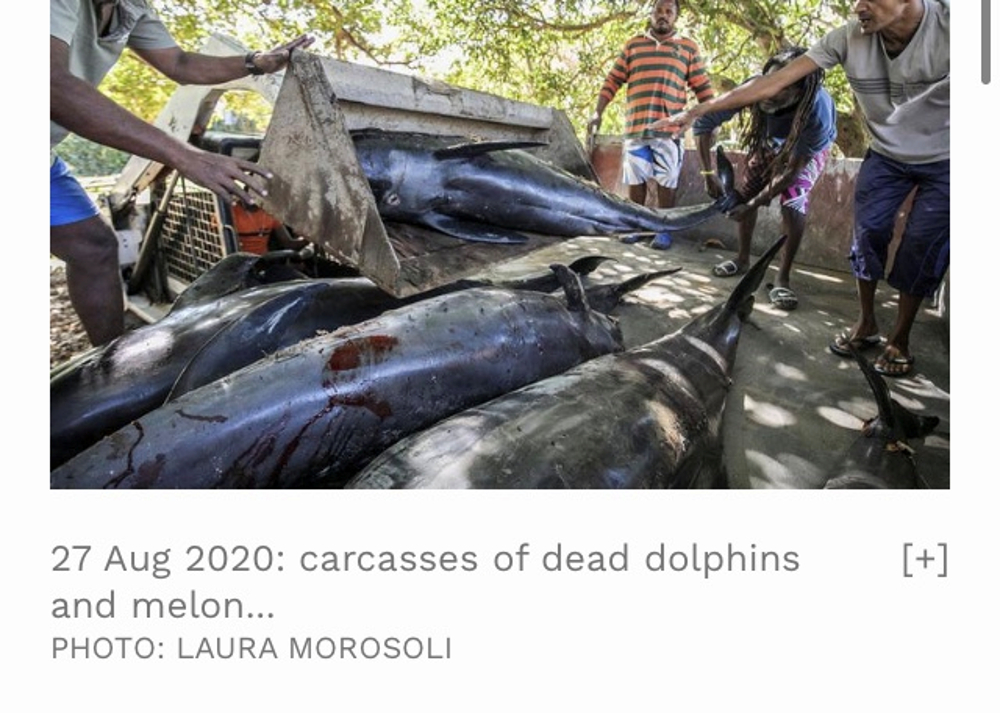 In the aftermath of the ship breaking up, three crew members of a ship involved in the clean up were killed when their boat sank, furthermore 49 dolphins were found dead in the weeks following the sinking. These deaths followed soon after the spill, but the scale of impact on human and wildlife health and the economic impact will be many times greater and will need to be monitored going forward. A recent report in the Lancet (2) examined the initial impacts on human health from the clean up operation detailing reports from locals of respiratory and neurological conditions.

The oil spill was the worst marine pollution in the history of Mauritius. The island depends mainly on ecotourism and depends on its water for food security. The inhabitants criticized the government’s management of the oil spill. 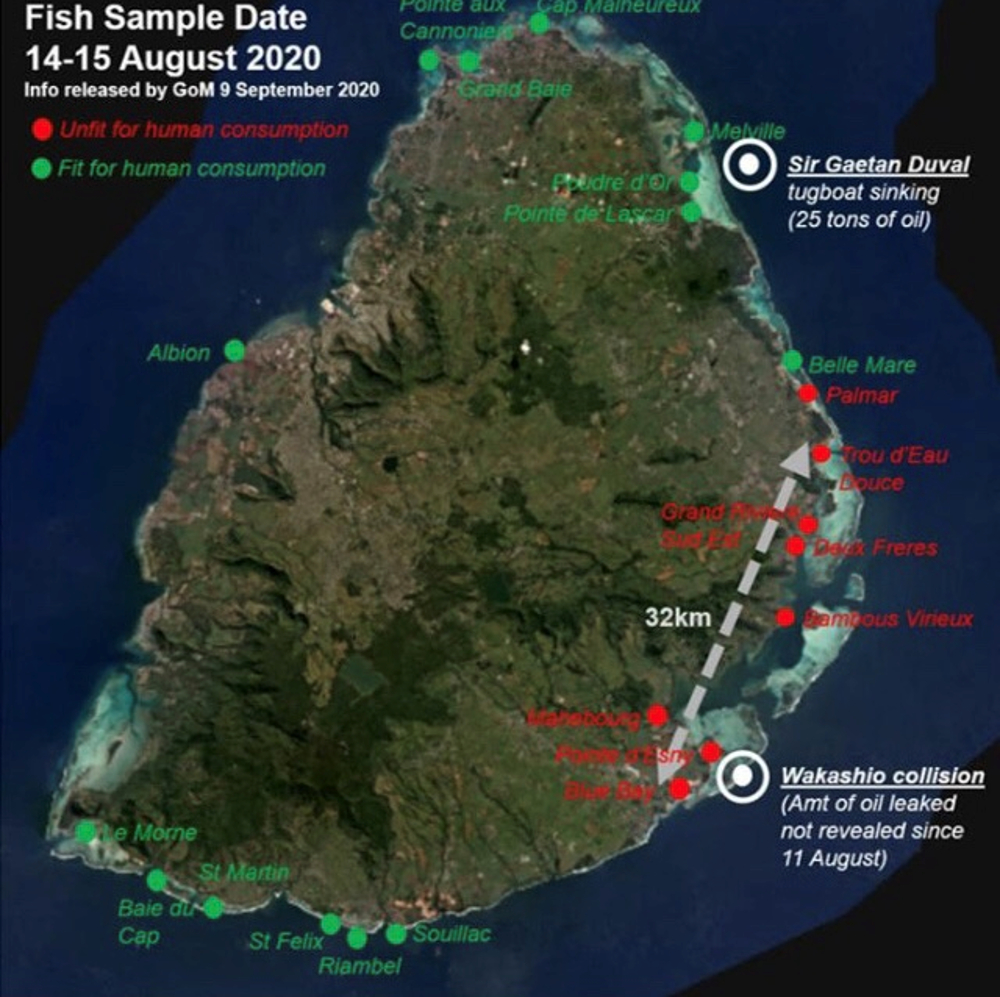 Mauritian Government Data on the impact on fish in terms of their safety for human consumption.

According to the IPPC (2018), the coral reef, fish, and other marine life are already under threat from climate change. Now with the MV Wakashio oil spill, the threats of an ecological catastrophe around the Indian Ocean island of Mauritius are more amplified.[3]

The oil spill is disastrous to the economy, food security, health, and as has already been mentioned tourism. It has been reported that tourism alone in Mauritius contributed $1.6 billion to the Mauritian economy in the year 2019.

The location of the shipwreck was close to a marine park, two internationally protected wetland sites of international importance (under the Ramsar Convention on Wetlands 1971, as amended in 1987), and a popular tourist destination. It is also a cultural location where a famous naval battle, containing historic wrecks that have laid undisturbed for two centuries. So the oil spill has not only damaged marine life but also destroyed the historic coastline.

This is one terrible incident for which the repercussions will be felt for many years. However, going forward, how do we protect people, wildlife and the economy in such an ecologically sensitive area?

In February 2022, two Taiwanese fishing boats once again ran aground on our coral reef at Bain-des- Dames. According to the Opposition Leader of Mauritius 30,000 boats pass through our maritime area each year endangering our coastline and as a result. Should the Mauritian Government have considered this? Should they have devised an action plan to manage these kinds of disasters and better still put in place measures to avoid them occurring in the first place? The Leader of Opposition further added that every 3 months, boats run aground on our reefs or break down in our lagoon and this constitutes a real danger to the citizens of Mauritius.[3]

Following these kinds of incidents in Mauritius, liability and compensation will be critical in the aftermath of the spill and in respect of the economic and human health consequences, as well as in respect of the costs of restoration of the environment. In terms of oil spills, the approach to the clean up operation can also seriously affect the marine environment, and human health as a result of the toxic effects of chemicals used to disperse the oil.

Could this be considered to be an ecocide? Whilst it will be the task of the court and the judge to conclude what will be assessed to be an ecocide.  Could it be said that the approach taken to allow this type of cargo into environmentally sensitive waters is a crime of endangerment?

To conclude, it is high time to adopt the latest international legal instruments in the field in order to prevent this kind of disaster in the future. If we really want to survive as human species,the first thing that we need to do is to change our perception which in turn will change our point of view toward Mother Earth.

The future is in our hands , and we can shape it as we like .We can be a mere spectator and watch the world crumbling down in front of our eyes or we can use our rational mind to take the proper action in order to survive .

We cannot wait until tomorrow because the future is Now! 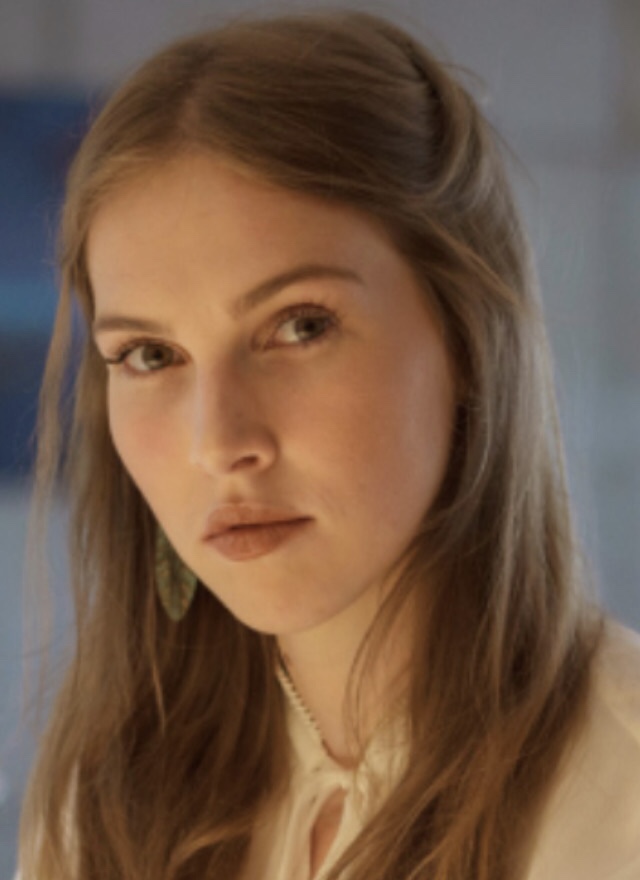 Why is it time to change the rules?

In many countries and human cultures around the world, non-human living systems and entities are seen as human-owned objects whose reason for existence is to be co-modified, exploited and used for human benefit and economic profit. This is today’s dominant narrative and permeates almost all spaces in which economic power is fostered and decision-making occurs. It expresses human authority over other life on Earth and does not provide the rest of the natural world with any legal standing in a human court of law.

This is concerning because by maintaining this dichotomy in governance systems built upon anthropocentric violence against other life on Earth, humanity is contributing to the irreversible collapse of countless ecosystems. Additionally, today’s dominant narrative expresses and confirms a human authority which defies the natural laws that govern the planet’s living systems. These destructive structures only benefit the few, jeopardize the rights to life, dignity and respect of the many, and unmercifully destroys the preconditions for life.

A pillar within this narrative is how “Nature” is often spoken about, through an insidious lens of a dichotomy that not only separates “human” from ”Nature” but also, arrogantly enough, fundamentally suggests that humans are somehow superior to and therefore “masters” of “Nature”. I call this a cognitive separation, which portrays “Nature” as something that exists outside of ourselves. As if it is something external from us. Disconnected from humans. This way of looking at ourselves and the world around us is contributing to the collapse of ecosystems across the planet. Ecosystems that also deserve to exist and thrive in and of themselves as well as to enable human existence, through the interconnected and crisscrossing relationships that make up the complex web of life on the planet.

In my 26 years of existence, I can say that I have witnessed how human activity is severely damaging the global commons such as the oceans and the Earth’s living systems. What this movement is working successfully towards is a law that, as Polly Higgins said in 2015, ”has a higher moral authority, [..], starts from first do no harm, stops this dangerous game and takes us to a place of safety”. If passed, this law would establish ecocide as an international crime, more specifically, the fifth international Crime against Peace. It would join the existing four crimes of the international criminal court: Genocide, Crimes against Humanity, War Crimes, and Crimes of Aggression.

No matter where the systemic damage of an ecosystem occurs, it would hold individuals and companies liable under international law. This jurisdiction would stand above all other jurisdictions and the individuals who are responsible for funding, permitting or causing this harm would be subject to criminal prosecution by the International Criminal Court.

Having this law in place would make a significant difference, firstly because it would be clear in no uncertain terms that the large scale destruction of non-human living systems is a moral crime. Secondly, activities that are defined as being criminal would not be able to access legitimate insurance or investment.

For me, “Nature” is a process I am intrinsically part of. It is the web of life composed of interactive and reciprocal relationships that connect every organism on Earth into one planetary and complex interdependent ecosystem. Nature is not an object nor a collection of objects, but a process of crisscrossing interconnected relationships.

I believe we as a human society must understand that we are Nature too. Nature lives within us and around us because we as humans are Nature too. In which ways am I so intrinsically interlinked? Here’s one: At this moment, I carry 1.5 kgs of air, “non-human” Nature in me. Without it, I die. Let’s throw in a second example. A 2018 study found that human cells make up only 43 percent of the body’s total cell count and what remains are microscopic creatures. If this is true, where does “microbe” within me end and “human” begin?

What is my point? I cannot separate myself from the water I drink, the food I eat, or the air I breathe.

The Earth system as a whole is facing an onslaught that is currently taking it beyond its capacity to self-heal and that affects each and every one of us, including future generations who have an intrinsic right to live in a healthy world that is richly diverse in species and life.

There is hope. Human society must change the rules to protect Nature and when I say Nature, I I mean to protect the natural world that we are essentially part of.