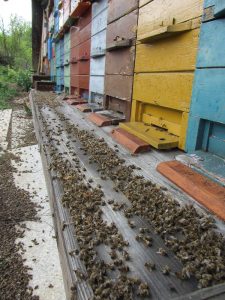 Slovenian bee colonies are in great danger, for they are again being killed in mass quantities due to extensive use of Phytopharmaceuticals in agriculture. There was a huge colony collapse in Slovenia already in 2011 due to insecticide called Clothianidin which belongs to the group of neonicotinoids. Neonicotinoids are insecticides that are chemically similar to nicotine, which has been used as a pesticide since the late 1700s and acts on central nervous system of an animal which results in its death.

Despite a relatively stable number of bee colonies in Slovenia there is a loss of almost one third of all the bees that occurs every two years. In April this year when bee season is not even at its beginning, the beekeepers were already again facing huge losses of bee colonies. The veterinarian inspection service is actively investigating the situation in close collaboration with police, since there is a high suspicion that the local farmers might be using illegal pesticides to spray their crops.

The terrifying fact about Slovenian bee colony collapse is that the use of Phytopharmaceuticals that are suspected to be the cause of deaths is at this time of year prohibited for use and therefore the question remains if killing of the bees is in any way intentional?

At the Beekeeping Association of Slovenia they are convinced that this is as they say, a systematic problem and they blame not the farmers that use those Phytopharmaceuticals, but the companies that produce them. They say farmers don’t always know what exactly is in the products they buy. The fact is also that the concentration of the active ingredients in the Phytopharmaceuticals is the highest in spring and that could result in high risk for bees survival. 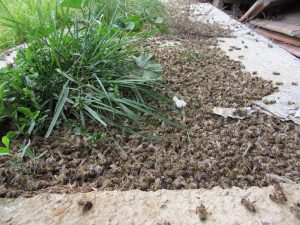 The latest spotting of colony poisoning occurred on 21st of April in the area of Renkovci and Moravske Toplice. Pomurje is a Slovenian region with huge areas of agricultural land where they grow rapeseed and with highest rate of bee deaths.The reports of bee colony collapse are coming from all over Slovenia.

To know more about Bee colony collapse click here, to learn more about the effects of neonicotinoids on birds click here and of course to end ecocide click here!

GMO crops are designed to withstand the chemicals used to control both insects and weeds. GMO corn, as well as other crops, can be sprayed with neonicotinoid systemic pesticide and herbicides, allowing all other plants to be killed except the GMO crop being cultivated. Roundup Ready crops is the best known example.

How does systemic pesticides work?
Systemic pesticides are absorbed into the plant as they grow, being soaked up into the root system. The pesticides are in the entire plant. So any pest eating on the leaves on the treated plant is killed. This is the intended purpose. But those same pesticides are also now in the pollen, which is being collected by the honey bees, beneficial pollinators, and other insects. Neonicotinoid and systemic treated seeds can easily be recognized as seeds with various colors such as purple, pink, green, and blue coatings.
Roundup is commonly used in industrialised agriculture and this might be the reason bees everywhere are affected.Of course the manufacturer, like in this case Monsanto, should be held responsible for the ecocide they are causing.Thank you and best wishes Kerstin

An excellent explanation Keratin. The big worry is all this chemicals end up in the foods we eat. No wonder human beings suffer from an increased number of illnesses which then have to be treated with drugs probably often made by the same offending companies. Peter

These companies have a lot to answer for. Continuing to destroy the natural world is an offence against humanity – how to stop their destruction?

The Ecocide law seems like a good start, share it widely among your friends, colleagues and family! 🙂
If you want to help us, you can also become a volunteer at End Ecocide on Earth 🙂
contact : lucia@endecocide.eu