Writing from Paris while global leaders converged for the UN FCCC COP 21 and events offering profound alternative solutions, Jeremy Lent shares his perspective on the impact of the The Rights of Nature Tribunal as a turning point for our planet:

“This week, here in Paris, we saw what may turn out to be a major milestone in the history of humankind. I’m not talking about COP21, but about a 2-day tribunal which, although having no legal standing or powers of enforcement, may turn out to have an even greater impact on the future direction of our world. It was a Rights of Nature tribunal, and it represents the most recent step in an important and hopeful journey for humanity – the recognition and expansion of intrinsic legal rights. 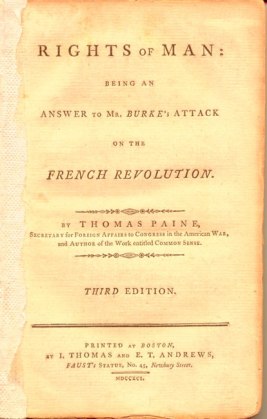 Thomas Paine’s “The Rights of Man” was a revolutionary document in his time.

Some historical context helps. Back in 1792, Thomas Paine, author of The Rights of Man, was tried and convicted in absentia by the British for seditious libel. Paine’s troubles arose from the fact that he was blazing a new trail that has since become the bedrock of modern political thought: the inherent rights of human beings.

Paine’s writing deeply influenced the composers of the U.S. Declaration of Independence, one of the most influential documents of modern history. “We hold these truths to be self-evident,” it declared, “that all men are created equal, that they are endowed by their Creator with certain unalienable Rights, that among these are Life, Liberty and the pursuit of Happiness.”

These truths, while self-evident to the founding fathers, were radical ideas for that time, so much so that even those who signed the Declaration applied them sketchily, not even considering that they might apply equally to the Africans forced to work as slaves in their plantations.

By the middle of the twentieth century, in response to the totalitarian horrors of genocide, the world came together to create a new stirring vision that would apply equally to all human beings: the United Nations’ Universal Declaration of Human Rights. For the first time in history, fundamental human rights were universally recognized and given legal protection.

Of course, these rights continue to be abused in all kinds of ways. But new norms had been established, and nowadays, following the formation of the International Criminal Court, when a tyrant wreaks havoc on his population, he knows that he might have to face legal consequences from the rest of the world.

As we enter into the heart of the twenty-first century, a new set of crises face humanity: the ravages of climate change, deforestation, industrial agriculture, the destruction of natural habitats, and the impending Sixth Extinction of species. Like Paine and his associates, a new group of visionaries are expounding a revolutionary concept that responds to our troubled era: the Rights of Nature.

This week in Paris, this group held a 2-day Rights of Nature Tribunal, part of which I had the honor to attend and film. The Tribunal was based on the idea that nature also has rights, just like humans. Its foundational document is a Universal Declaration of the Rights of Mother Earth, calling for the “universal adoption and implementation of legal systems that recognize, respect and enforce the rights of nature.”

Jeremy Lent is President and founder of the nonprofit Liology Institute which is dedicated to fostering a worldview that could enable humanity to thrive sustainably on the earth. Jeremy is author of soon to be published The Patterning Instinct: A History of Humanity’s Future and his novel, Requiem of the Human Soul, published by independent publisher Libros Libertad in 2009.