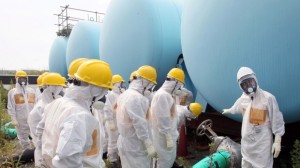 3 years after the Fukushima disaster, water contamination is a huge issue that has not been solved. Since the March 2011 meltdown, highly radioactive water has been kept in the tanks, with daily about 400 cubic metres leaking into the Pacific Ocean. Last August 300 tons of untreated radioactive water leaked into the Pacific Ocean. In order to fix the problem, Japanese authorities have come to a radical solution: dumping contaminated water into the ocean with a “controlled release”…starting in May 2014.

What does “controlled release” mean? A filtration process would remove radioactive elements from water. However, there are several doubts with the filtration process. There is worldwide no process found yet to filter the extremely dangerous strontium – which will thus be leaked into the ocean.

Shunichi Tanaka, chairman of Japan’s Nuclear Regulation Authority explains that “We have to make a choice comparing all risks involved.” Yes indeed, and this choice must be to End Ecocide and not releasing radioactive water into the ocean. Sign at www.endecocide.eu

I have found it difficult to balance my love of fashion and the industry that surrounds it with activism for our environment. Vivienne Westwood gives me courage every day to fight on.