On December 1st, Prisca, the initiator of the European Citizens’ Initiative, presented End Ecocide at the 40th anniversary of the European Environmental Bureau (EEB), an umbrella organisation bringing together citizens’ environmental organisations from all over Europe in order to influence EU policy. Read some of her thoughts below.

The EEB had assembled an impressive list of speakers – from the current and previous EU Commissioners for the Environment Mr Karmenu Vella and Mr Janez Potočnik, as well as the previous EU Commissioner for Climate Action Ms Connie Heedegard, to UNEP’s director Achim Steiner and the OECD’s Director for the Environment Simon Upton, as well as senior representatives of all the major NGOs in Brussels. 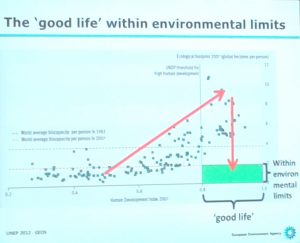 Simon Upton’s presentation – Even the OECD recognises: life within environmental limits will demand a radical change in lifestyles and the way we run our economies. Relying on economic development will not be enough.

The overall mood at the conference was a mixture of despair and hope in light of the incoming European Commission and the apparent absence of a focus on protection of the environment in its priorities. Some of the more fearful seem to be proven right with the recent disastrous decision by the Commission to shelve legislative proposals for the European Air Quality Directive and the proposal on the Circular Economy. This is not only sad for us as European citizens but also poses a threat for Europe’s role in the world. It is a step backward when we so urgently need a huge leap forward. However, as with every crisis, there also lies an opportunity and if we unite and find the right narrative, we can make great use of it.

Remarkably, most of the speakers agreed that what we need is a paradigm shift and systemic change. However, most of them doubted whether we could achieve that. There are some elements of systemic change that have been implemented successfully (such as the REACH (chemicals) or eco-design directives at EU level). A key step forward would have been Potočnik’s vision of the circular economy. However, member states found that too ambitious and the Europe 2020 strategy still includes the goal of GDP growth as the sole and most important focus. As Ludwig Krämer, professor of EU environmental law, commented, this is a huge step back from the 1970s when an increase in living standards rather than economic growth was seen as the goal for the EU’s work and contradicts the EU Treaty itself according to which the Union shall work for “sustainable development of Europe based on balanced economic growth and price stability … and a high level of protection and improvement of the quality of the environment” (Article 3).

John Hontelez, former EEB Secretary General, reflected on the history of the environmental movement. One key issue he identified is that while there were clear frontrunners in the 1980s (such as Germany or the Scandinavian countries), these seem to have disappeared. This is a real problem as it might have consequences far beyond the current administration. Progressive countries in Europe need the EU in order to have a larger-scale impact. But the EU also needs these frontrunners. While in the past EU rules were taken as the bottom, now many member states take them as ceiling for their own legislation. This is a very dangerous phenomenon if it continues as it hinders ambition.

Ludwig Krämer put it clearest when he criticised that the biggest failure of politicians today is that they didn’t manage to integrate the environment in other policies. As several speakers underlined, rather than speaking of ‘no growth’ where you hit a dead-end with policy-makers, we need a narrative of ‘another kind of growth’. We also need to identify the losers and offer them a perspective. An interesting aspect that was highlighted first by Connie Heedegard and Hans Bruyninckx, director of the European Environmental Agency, is the need to involve ethical judgement in policy-making. Just as we see it!

I presented End Ecocide in the session on democracy, accountability, and the rule of law. My and the other speakers’ presentations were followed by a very interesting discussion centred around the question whether we need just better implementation of existing legislation or new legislation, as well as whether citizens have already sufficient access to justice in environmental matters. This was the goal of the Aarhus convention which still hasn’t been implemented fully in all member states. Most of the audience was supportive of the idea of an ecocide law to contribute to the paradigm shift and systemic changes needed, but questions surrounding the exact definition of ecocide or liability for ecocide outside the EU were raised.

Overall, the event was very interesting and made clear once again one simple important fact: In Europe, we have the most environmentally conscious citizens, we have the technology that’s needed, we have the potential to attract the necessary investment, and we have the stable rule of law needed to implement systemic changes. We are also in a crisis where we need imaginative and innovative solutions to emerge. It’s difficult to comprehend why our leaders instead chose to focus on the old paradigm of economic growth, potentially abandoning our leading position in environmental protection worldwide.

One of our values as End Ecocide is optimism. I feel that this is the only thing that can help us. Remain optimistic and continue fighting, continue spreading the word, and continue advocating for the need for real and quick system change. There are also some opportunities: the crisis with Russia has put the need for the energy union on top of the agenda – if we manage to ensure that becomes about clean energy rather than the return to coal and fossil fuels, this is a window of opportunity. The second opportunity is the crisis. As sad as it is, if growth doesn’t return to Europe, finance ministers will start to listen to new ideas – and maybe the work on the circular economy was not in vane.

The big dilemma is that as Heedegard puts it: “We live in a world where we need politics more than ever” but at the same time we lack environmental champions and courageous leaders to take the steps that we need for the transformation to the sustainable and low-carbon policy. The law of ecocide prevention could be one crucial element of such transition. We need all of you to stand up for it!