The long journey towards an ECI that works

Today I participated in a workshop entitled “An ECI that works” in Brussels. It brought together ECI organisers, researchers, civil society organisations, and representatives of European institutions.

We all encounter the same challenges, the same problems but we can also be proud of ourselves because what we have achieved is remarkable given the circumstances. From the volunteers-only run ECIs we are actually number two (check the number of signatures of all ECIs here). Only Basic Income has more signatures (almost 160,000). The two successful ECIs which participated, Right2Water and One of Us, both had large organisations and very important supporters behind them (such as the labour unions or the pope). And what the experience of Right2Water also shows is that it’s not too late. They collected over a million signatures in one month, so we can also still make it! But we need to find our large multiplier. So help us find a VIP.

The main issues with the European Citizens’ Initiative (ECI) as a tool for direct democracy include:

These issues must be remedied if the ECI is to become a real tool for citizens. Otherwise, it runs the danger of becoming just another tool for the big lobby groups and civil society organisations which have the resources to undertake a proper marketing campaign. To prevent that – or at least ensure that the public knows who is behind an ECI – stronger transparency regulation is needed.

All ECI organisers agreed that for a successful initiative, strong local and national teams are key. As there is no European public space yet, we have to put our issues on national agendas. Linking to local issues is of huge importance. This is where we can learn a lot from Right2Water. We have to find local cases of Ecocide! If you know of one, get in touch with Pauline (cases@endecocide.eu). In addition, it needs to be aligned with ongoing policy discussions (such as the Concessions Directive or the troika wanting to force Greece to privatise water supply for Right2Water and the EU budget for Fraternité2020) and famous supporters (such as the Pope promoting One of Us in the Sunday prayer and the German comedian promoting Right2Water on prime time TV) are of crucial importance.

Summarising the day, the following key issues were identified by the group: Red are problems and challenges, green are useful existing tools and support, blue are necessary changes in rules and required new tools and yellow are opportunities. As you can see, unfortunately at the moment the challenges and necessary improvements prevail and improving these issues is key to ensure “an ECI that works”. 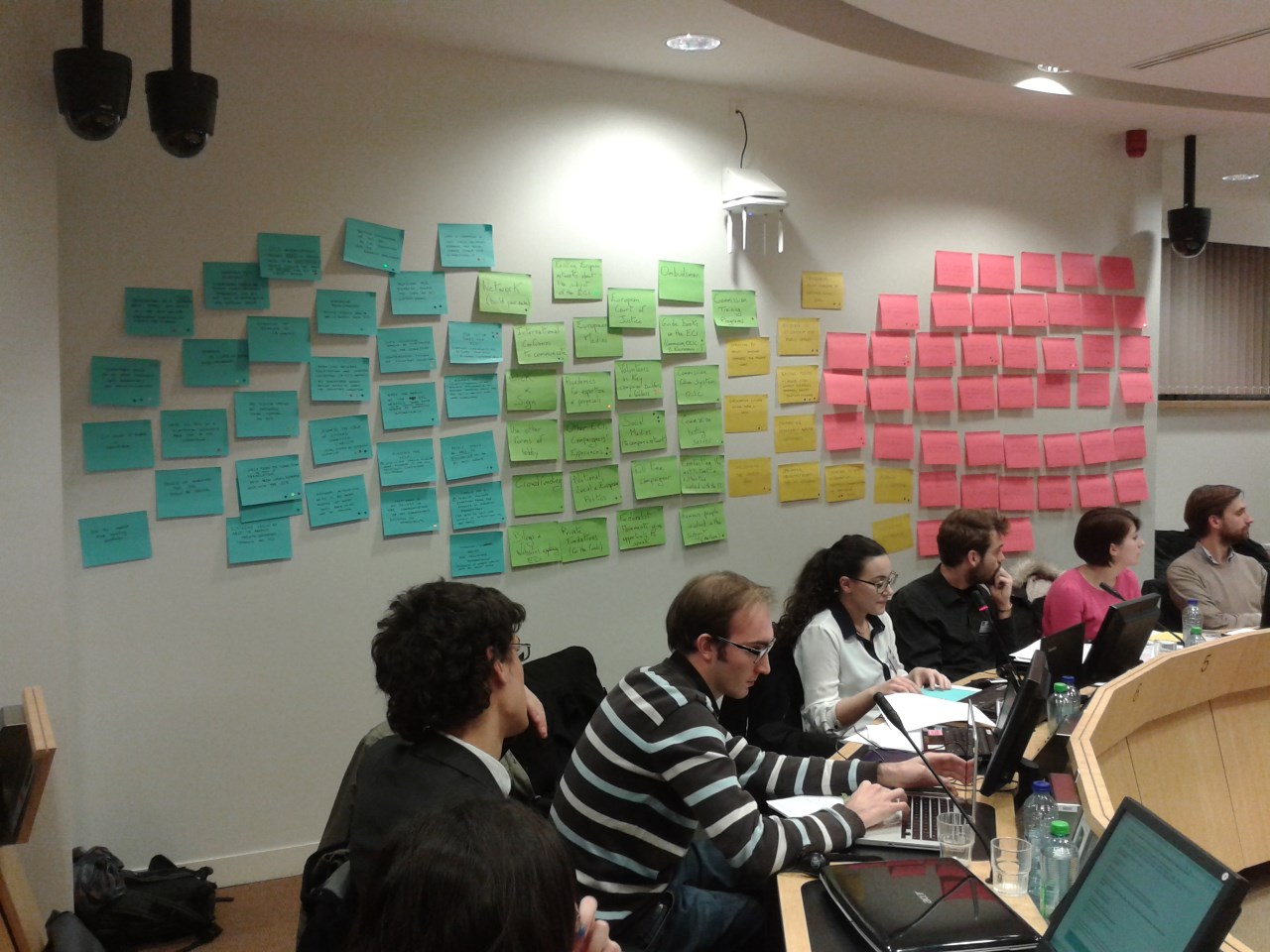 It remains very interesting to see how the successful ECIs will fair when working with the Commission and Parliament to understand whether actually action will be put forward. However, what all of us agreed is that it is a successful tool to put the issue on the agenda and we have all built networks.

For End Ecocide, we have managed to make a term known throughout Europe that no one knew before, we have built a huge network of supporters and organisations interested to work with us and we have engaged so many people to contribute to democracy and stand in for what they believe in – this will continue after January 21st and I’m very excited to see where the journey will lead us and who knows, maybe in 2020 we will actually have an international crime of ecocide established, rather than “only” a European one?

I think the accent on the Pope’ support for « One of Us » is overrated as Protestants and Orthodox Christians have also participated with enthusiasm in this Initiative. It happened that many people are recognizing, still, the simple fact that every human life begins at conceptions. Just as science is stating it.