Desmond Tutu, Vivienne Westwood, Naomi Klein and Noam Chomsky are among a group of high-profile figures who will issue a mass call to action on Thursday ahead of the UN’s crunch climate change conference in Paris in December.

They call for mass mobilisation on the scale of the slavery abolition and anti-apartheid movements to trigger “a great historical shift”.

Their statement, published in the book Stop Climate Crimes, reads: “We are at a crossroads. We do not want to be compelled to survive in a world that has been made barely liveable for us … slavery and apartheid did not end because states decided to abolish them. Mass mobilisations left political leaders no other choice.”

Read the full article on The Guardian

End Ecocide on Earth by the voice of its spokesperson, Valérie Cabanes, contributed to the book and the drafting of the appeal. The Chapter is about “Ecocide and Climate : reforming the International Criminal Law”.  Soon in english 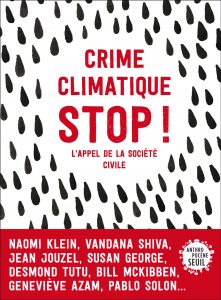